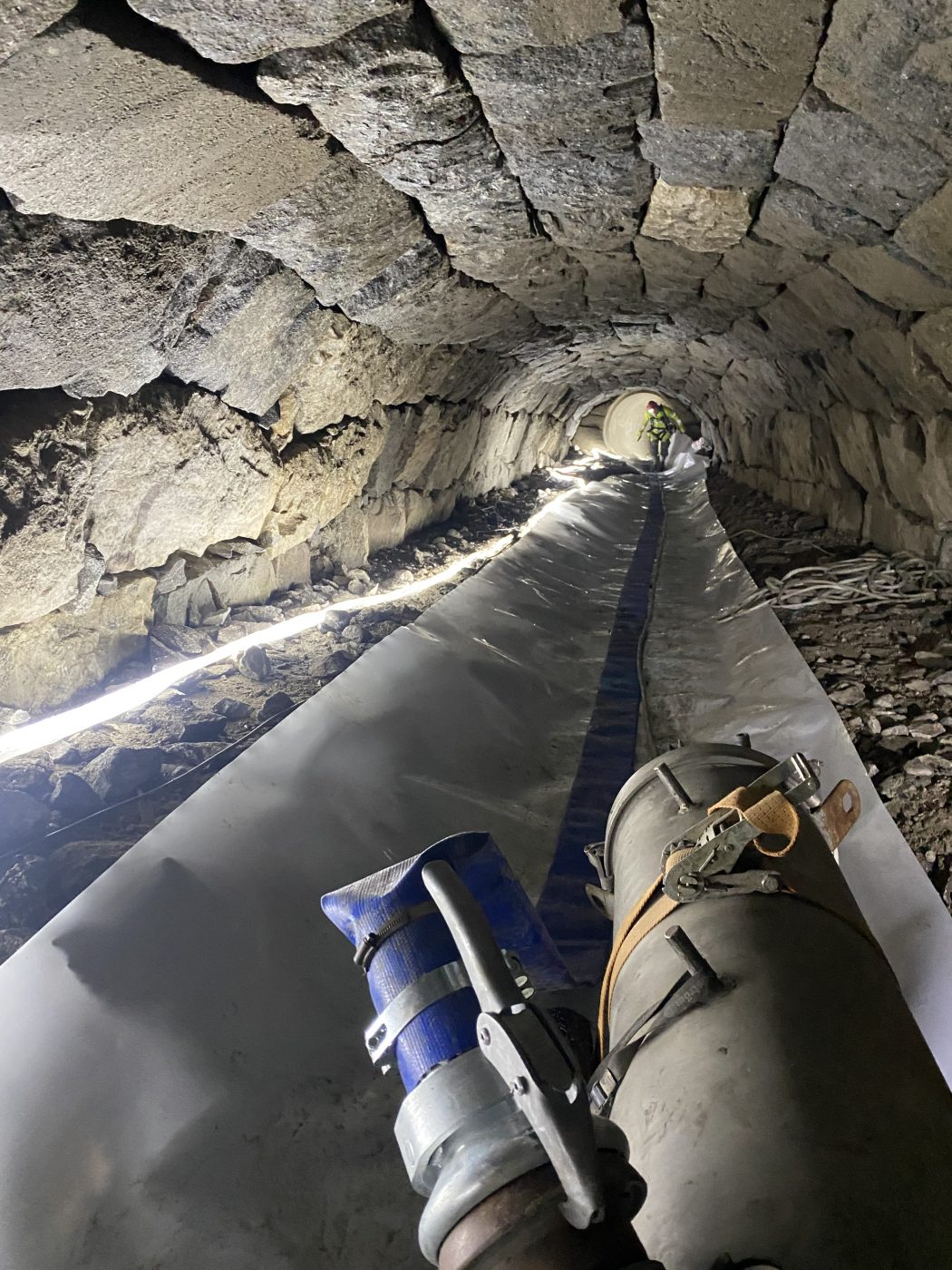 Railcare has completed a special project for Infranord and the end customer, Trafikverket. Involving the renovation of a 32-metre stone culvert under the railway, which is a central section of a 128 metres long culvert. The project offered its challenges to complete the work and required a great positive attitude.

During Trafikverket’s investigation of the culvert at Dingersjö in Sundsvall. It was discovered that the culvert section under the railway’s newly built double track had deficiencies in the old stonework. In total, the length of the culvert is approximately 128 metres and extends under a country road, a service road, a double-track railway and finally a pedestrian and bicycle path. It was the part under the railway that needed to be renovated. This part started 50 metres in from the edge of the 128-metre long culvert and then extended another 32 metres.

Due to the length and location of the culvert, it was decided early on that relining would be the best method, which is an effective way to get a durable culvert, without having to dig or disturb any traffic. Göran Bäckman, Supervisor for Infranord, talks about the project:

– Since the renovation was to begin 50 metres in from the edge, the working environment conditions were not optimal. From the beginning, we investigated the alternative of digging down to this middle part, but the shaft was 30×30 metres and about 6 metres deep, which became too extensive in both traffic impact and the amount of spoil to handle. In addition, there were district heating lines that further hampered this option, and therefore the final choice was to enter via the culvert outlet.

Before the relining could begin preparatory work was required, this consisted of; ground preparation work for the installation equipment, planning and hiring of resources for plugging inlets, water pumping and flushing as a backup to keep the water level at the inlet to an acceptable level, cleaning and flushing of the culvert, as well as extra reinforcement work where cracks and incisions had occurred.

– Throughout the project, safety has been high on the agenda with detailed planned work preparation and risk analysis, as well as special measures before the project started. We have also had several reviews based on the project development and subsequently revised the risk assessments on an ongoing basis, says Tobias Lindgren, Operations Manager at Railcare Lining AB.

The culvert presented several challenges. Since the infrastructure on-site had been developed over a long period, the extensions of the culvert had different dimensions and several angles in the culvert. The stone culvert that was to be renovated was about 1450 mm wide and 1700 mm high. Railcare’s specially developed filling material was used in the corners of the stone culvert to better adapt it to the size and shape of the liner. The outlet, which was access to the work area, had a diameter of 1600 mm, which is a relatively large culvert, but at the same time relatively low and cramped for an adult to both walk and work in.

– When we pull the liner in place, inflate it and harden it, it must be done in one step. In a normal culvert, the actual positioning takes about 2 hours. This project took 12 hours. Working that number of hours is demanding, with the addition of doing it in a space with a height of 1600 mm where you cannot straighten your back is a challenge, says Tobias Lindgren.

However, this does not seem to have affected the attitude of Railcare’s employees. The customer commented:

– This is among the most positive collaborative atmosphere I have experienced. Railcare maintained a positive attitude despite the demanding work environment, says Göran Bäckman.

The railway culvert now lasts for at least another 60 years where it is located.

– Railcare delivered what they said during the promised time, even though there were additional jobs in the project, says Göran and sums up:

– It’s great when everyone pulls in the same direction and tries to make the best of what you are faced with. Then it is great to do the job together.

Railcare Lining AB was established in 2003 and performs culvert renovations for railways, roads and industries. Railcare uses fibreglass-reinforced polyester that is UV-cured. The method has been established as the most environmentally friendly according to Trafikverket’s report “Relining – an overall assessment” (Publication 2020: 272).